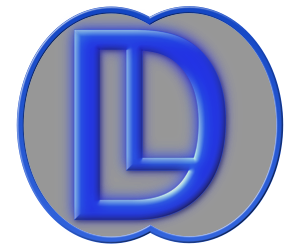 The Doble Lab logo was inspired by a stem cell that has recently undergone a division to yield two new cells, as viewed through a fluorescence microscope. The shape of the cell on the right resembles the letter D. Within the D, the letter L lines up with the midline of the two newly generated cells. The pale blue color of the central nuclei is similar to that obtained with a commonly used fluorescent DNA dye, DAPI, and the blue color of the cytosol suggests a blue-fluorescent protein-tagged cytosolic marker. Variations on this color scheme will pop up on the website every now and then. I'm also working on alternate logos that may replace the current one, which is a simplified version of the one above.

The Doble lab studies the signaling networks within stem cells that control their amazing properties. We are especially interested in key developmental signaling pathways essential for stem cell self-renewal and differentiation. Malfunctions in these pathways underlie many human diseases including numerous cancers and developmental disorders.

The oddly named Wnt proteins can bind receptors on the outside of cells to initiate signaling events that regulate a variety of cellular processes. The Wnt family is essential for proper mammalian development and is required for the controlled maintenance of many stem cell types.

Our primary model systems employ mouse embryonic stem cells that we manipulate using methods described in the sections below.

We routinely employ CRISPR/Cas9 and TALENs to edit the genome of pluripotent stem cells. These powerful techniques allow us to precisely manipulate specific genetic locations with ease. Examples of cell lines we have generated include those with single or multiple genes knocked out and lines in which we have added fluorescent protein tags to endogenous genes of interest.

By confining pluripotent cells to micropatterns of different shapes, we can generate highly reproducible differentiation environments that allow us to study detailed mechanisms of cell fate determination. The beautiful image on the left is a single micropatterned circle filled with differentiating embryonic stem cells expressing three different fluorescent fusion proteins. The diameter of the unmagnified circle is 1 mm.

To identify proteins that are in close proximity to chosen proteins of interest, we are using variations of the BioID system. In this system, a promiscuous biotin ligase is fused to a bait protein, enabling the biotinylation of proteins closely associated with the bait. Biotinylated proteins are readily isolated by using streptavidin affinity columns and are identified by mass spectrometric analyses.

Several projects in the lab are related to understanding the mechanisms through which transcriptions factors of the TCF/LEF family regulate target genes. These transcription factors are the primary mediators of Wnt-regulated transcriptional programs. We employ next-generation sequencing approaches that enable us to evaluate genome-wide consequences of transcription factor activation or repression.

We use a variety of techniques to assess the ability of pluripotent stem cells to differentiate and self-renew. One striking example is the formation of embryoid bodies, which spontaneously generate cardiomyocytes that you can observe contracting in the video.

The Doble lab relocated to Winnipeg at the beginning of July 2019 (see our Blog for details). Many projects are on hold until new trainees are recruited, although key studies are ongoing. You can find out more about projects we are working on and ones that remain for new recruits to pursue by clicking the Learn More button below.